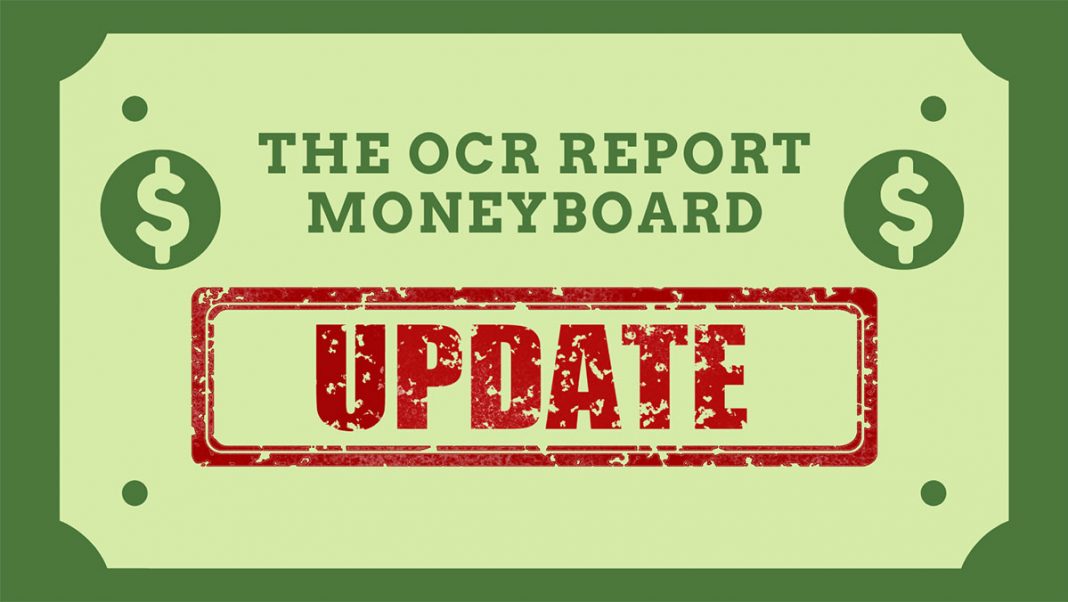 Alex Walker and Logan Broadbent took advantage of a slow week on the Moneyboard to make their move. 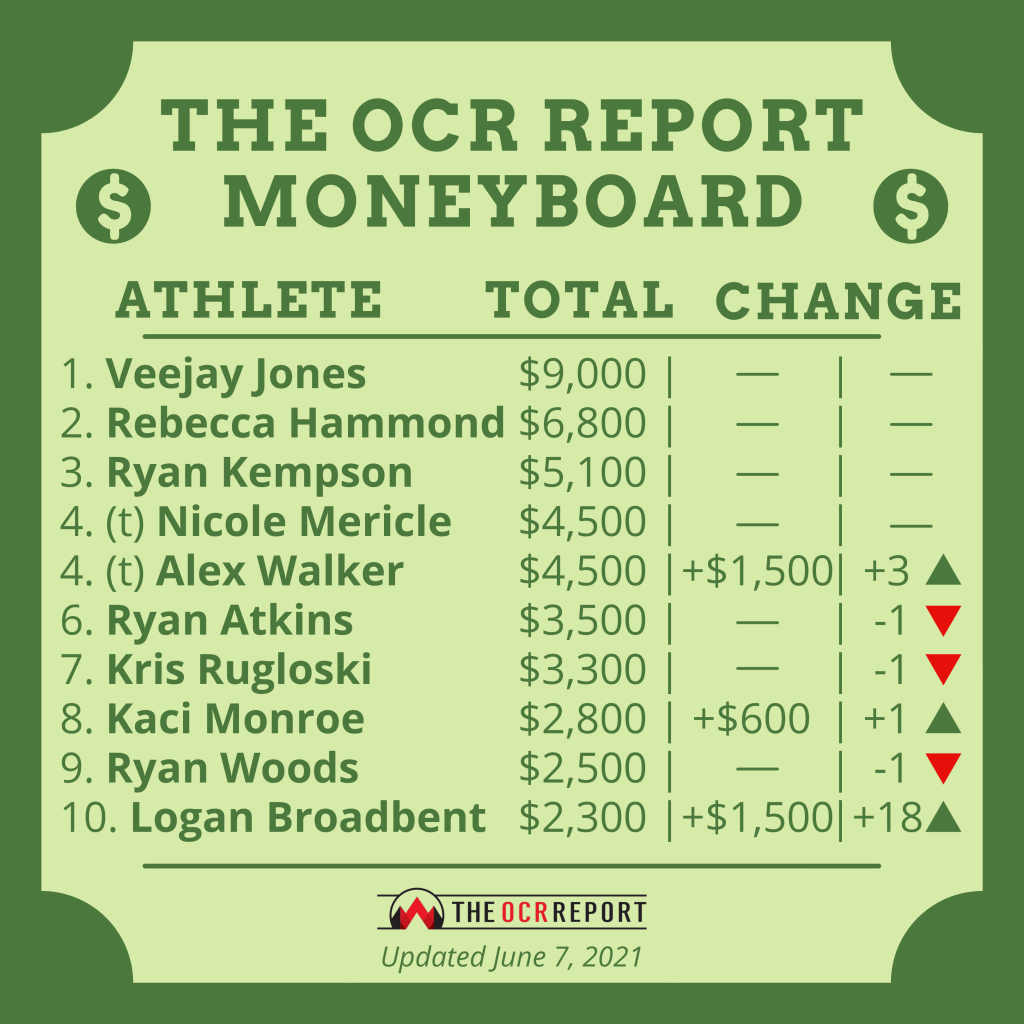 First, Second, and Third place were unchanged with Veejay Jones, Rebecca Hammond, and Ryan Kempson taking the weekend off from racing. (At Hildervat Rebecca Hammond told us she’s taking a little break from OCR to focus on her Doctor-ing, so we may not see much movement from her for a while.)

Still in fourth place, Nicole Mericle did not win any money this weekend, but she did get something: A new ACL. Nicole underwent surgery to fix the knee injury she suffered at Hildervat a few weeks back. We wish her the best and hope for a strong recovery. Nicole is unquestionably at the top of her game and the top of the sport. A strong healthy Nicole Mericle is good for OCR and good for everyone. Get well soon Nicole!

Alex Walker did something that had never been done at a Spartan race in the United States before this weekend. She won the Elite Heat in all three distances on the same weekend. Alex won the Beast on Saturday and the Super and Sprint on Sunday. That $1,500 in winnings moved her up three spots on the Moneyboard, from 7th into a tie with Nicole Mericle for 4th. With Mericle injured and Hammond in 2nd taking a break from OCR, Walker has an opportunity to keep moving up the board this year.

In 6th and 7th place are Ryan Atkins and Kris Rugloski. No new money for them this week and with Walker leapfrogging them, they both move down one place from last week.

Kaci Monroe moves up into 8th place with $600 in winnings from Spartan Ohio. She placed second in all three races, just behind Alex Walker. Second place at all three Trifecta races in one weekend is an accomplishment. Monroe in 8th, Rugloski in 7th, and Walker in 4th have raced against each other MULTIPLE times this year. With the Webster/Mericle/Hammond rivalry looking to take the back burner for a while, we hope that Walker/Monroe/Rugloski can fill that vacancy.

Ryan Woods did not race this weekend. He swaps spots with Kaci Monroe and drops down one position, to nine.

Logan Broadbent did something that had never been done at a Spartan race in the United States before this weekend. He won the Elite Heat in all three distances on the same weekend. Broadbent won the Beast on Saturday and the Super and Sprint on Sunday. (Hey, that sounds familiar!) Broadbent and Walker had themselves quite the weekend at Spartan Ohio. Broadbent moves up 18 spots(!) to number 10 on the Moneyboard. That move of +18 is the single largest jump in Moneyboard position anyone has made this year.

When it comes to OCR race statistics, Jack Bauer is the recognized expert. We asked him about Walker and Broadbent’s accomplishments in Ohio. He told us they were the first US-based athletes to go 3-for-3 at Elite races on a Trifecta weekend, but the reason they were first may be partly due to a technicality. Most Trifecta weekends in the US only feature two Elite races. The Sprint leg of the Trifecta will usually be Age Group and Open only. “For instance, Robert Killian would have done it in West Virginia in 2018, but the Sprint was Age Group only”. For more info on “Three Podium Weekends” check out this (pre-Ohio) post from Bauer on Instagram.

Also winning money this week were the podium winners at Battle of the Lions: Kansas City. None of them made enough to crack the Moneyboard, but Amy Pajcic did move in 13th place. She is in between Lindsay Webster at 12th and Faye Stenning at 14th.

Coming up: Spartan Tri-State and Savage Race Charlotte are this weekend with prize money for the winners, and NEXT weekend? Spartan Colorado Springs, Spartan Dallas Stadion, and Hildervat St. Cloud Florida. Good luck all!

Enter your email to receive the latest OCR news.

OCR Photo(s) of the Day: The 3k Championship podiu

298. Fran Chiorando from The OCRWC Podcast